Horror has a new master…
In the chilling tradition of Stephen King, Joe Hill, and Dean Koontz, Devils plunges you face-first into the deep end of evil. Each story features its own devil, but none of them have tails, bright red skin, or horns. All of them tell their victims lies, all of them try to corrupt. Worse still, all of them feel familiar.

Five stories. Five devils. Five chances to lose your soul forever. Five creepy stories, just for you. Do you have the guts?

Robert survived a war and addiction. Can he survive the woman who calls herself the devil?

Rick is consumed by a burning desire for vengeance. The lord of vengeance offers to help him get his revenge. But at what cost?

Rena was kidnapped by religious fanatics who want her to bear children for their army. Does she have what it takes to escape hell on earth?

John Calvin Black thought he knew the forest. But something new stalks the woods, and it’s hungry.

A man appears out of one hell of a snowstorm. Is it safe to let him in?

One piece of advice: read this with the lights on. Oh, and don’t get too close–you don’t want these devils’ attention.

Or is it already too late? Pick up Devils today and find out!

Includes a four-chapter preview of  Errant Gods, the first novel in the Blood of the Isir series!

"A horror collection of deliciously disturbing and unsettling tales.

The collection is brilliantly composed through slow, creeping exposition and enough shuddering moments to keep readers awake at night."

"Surreal and constantly surprising, Devils is clearly the work of a writer who knows what he's doing with Vick taking us to the depths of devilish depravity and beyond. Delivering sharp, and above all compelling nuggets of short, but perfectly framed works of fiction these are stories to be read with the light on and will linger in your memory for days and weeks to come."
- BookViral.com

Five great short stories, each one interesting in its own way.

If you enjoy stories with a twist, some creepiness and irony, this book should please you. I thoroughly enjoyed these stories. Each one is a seduction - pulling the reader in, making you wish the story would never end. There is also a preview of the authors future release "Errant Gods" in this book. It too is gripping, I cannot wait to read what comes next!

"Definitely one of my favorite new authors!!"

Hands down, anything less than 5 stars would be a grave injustice

"though be warned that Devils is best read with the light on! I rarely come across short stories as good as these and author Erik Henry Vick has a real knack for taking his readers to dark places. Each one is a different slant on manifestations of the Devil. All are tight, well written, highly imaginative and above all original. Can't praise this book enough. Absolutely loved them all."

An AMAZING set of scary stories.

"I'm sure to have wonderous nightmares for weeks. Highly recommended!"

Seize your interest and keep it

"There are many ways one can define a 'devil' from the most fantastic to the terrifyingly familiar and the author shows this fact masterfully. This collection is an excellent sampling of the writer's ability to seize your interest and keep it. Erik Henry Vick is a talent to watch, do yourself a favor and get a copy of 'Devils'; you won't be disappointed!"

This was a great collection of stories.

"As soon as I finished one story, I immediately started on the next! I've enjoyed everything I've read from Erik Henry Vick and can't wait to read what else he has done. I see a shopping trip in my future."

I’ve seen the devil, and she was beautiful.

The first time I saw her, I was high on coke, and I believed she must have been a hallucination or a dream. She had red hair that fell to the middle of her back like a red stage curtain at a fancy theater. When I say red, I don’t mean like what the Brits call a ginger—not like my hair at all. No, her hair was the color of arterial blood, like red licorice, or cherry snow cones.

Her skin was creamy, almost translucent, with pale blue veins drawn across it. She wore a black leather mini-dress and knee-high boots that ended in chrome stiletto heels—not the typical outfit for a coke house. Even so, it was her orange and strangely magnetic eyes that stood out the most.

She had walked right in like she owned the place, kicking aside the trash, needles, and junkies that were in her way. She glanced around and then stared at me. I was sure she could see my lust for her burning like a torch, and a blush crept up my cheeks. Her lips twitched in what could have either been a suppressed smile or a sneer. She flipped her hair and walked out without so much as a word for anyone, leaving me wondering if she was real at all.

The next time I saw her, I needed to score like I needed to breathe. My body was on fire with the Aches and the Shakes. The day was gray, and the air tasted desperate. I was running around harum-scarum, looking for anyone I knew who could fix me up. I was flat broke. I was always beggared, and most of the people I knew avoided me like I was soaked in gasoline and playing with a lighter.

I was under the elevated tracks between Tenth and Eleventh Avenues in Brighton Beach, which was a far safer place for a redhead with freckled skin to score than Harlem or Jackson Heights. I was begging a Russian dealer I knew to cut me a break when I saw her looking down at me from the second-story window of one of the row houses. Her eyes bored into mine, and I could feel her fury, though I had no idea why some strange, albeit beautiful, woman would be mad at me.

She opened the window and leaned out, still glowering at me. Her hair was like a wide swatch of blood-red silk billowing in the breeze. Her eyes were bright—like two fiery suns. I don’t mean it like she was happy or mad or whatever. They were bright like a light bulb is bright.

“Ay, que chulo,” she yelled with a sneer and a twist of her chin toward the heavens.

I had no idea what that meant, but from her tone, I didn’t think it was a term of endearment. It made me feel like a scumbag, and a blush stole up my neck like a wolf stalking prey. I ducked my head, and just then, happened to see my friend Mikhail come through the alley from Tenth a couple of blocks north.

I shot her the bird as I turned toward Mikhail. It didn’t make me feel any better, though. In fact, it made me feel like more of a sleaze ball. All I wanted was a little coke, a clean needle, and some water.

“Hey there, Rob,” said Mikhail. He looked me up and down. “You look terrible!”

He just looked at me for a second, all serious. “I will still pay for rehab, Rob. A guy like you—a soldier and all—this…this isn’t good for you.”

I tried to smile, but I hated it when Mikhail got like this. “I’m all right, Mikhail. I just need a fix.”

“Okay, okay,” he laughed. “That’s for later then. For now, let’s go to my apartment. You’re not going to believe the stuff I’ve got now.” He clapped me on the shoulder. As we started walking toward Oceana, he slipped his arm through mine.

Yeah, it was weird, but Mikhail did it to everyone.

The next five or six days are like a blank spot in my mind. Mikhail was rich, see? He shot coke up his arm like a fiend, sure, but he kept it under control most of the time. Not like me.

He bought the good shit from his Russian “associates” by the kilo, and if you were his friend, he never asked you to pay up. Mikhail just smiled and laughed and patted you on the back if you tried to thank him.

Everyone said he was Bratva, that he was dangerous. I didn’t know and didn’t care. Whether he was part of the Russian mob or not, his coke was excellent, and he was willing to share.

Anyway, I woke up not knowing where in the hell I was. I didn’t know what day it was, and I didn’t care. I was much too focused on getting the eight-hundred-pound gorilla to stop stomping on my head. It’s not like I had to be anywhere. I had long since passed the point of being able to hold a job.

Not that I wanted to.

Wherever I had decided to sleep, it stank like a sewer. Eau de Rotting Garbage. Or worse.

I felt trashy and mean, lying in the proverbial gutter. Yeah, my skin ached like mad, and I felt like the fleas of a thousand dogs had infested my hairy bits, but it wasn’t just that. My mouth tasted like I’d been eating the garbage that was strewn around me. I didn’t dare open my eyes for more than a second. They burned and ached like I’d put hot coals under the lids.

I must’ve resorted to snorting coke or meth or heroine or dog shit at some point because I could feel the thick sludge trying to creep down the back of my throat. Without opening my eyes, I hawked and spat.
Something slammed into the side of my head, and the fireworks went off.

“What the fuck?” I mumbled.

I knew what this was. Beat cops. Beat-down cops, to be precise.

I rolled myself into a tight little ball and waited for it to end. I just hoped to God I hadn’t spit on someone’s shoes.

I was lying there, fretting about the next boot to the head, or chest, or side, or groin. I might have been talk-ing—I’m not clear on that. If I was, I was talking nonsense and gibberish.

The voice was electric, soft, and smoky. It made me think of every sex dream I’d ever had as a kid. It sounded familiar—like it was someone I’d known since childhood, but hadn’t seen in a long while. I opened my eyes and peeked through the fingers I had laced over my face. If I weren't already on the ground in the garbage piled up in the alley, I’d have fallen on my ass.

It was her. The “ay, que chulo” woman. The goddess in black leather. She of the red hair and pale skin. She was even wearing the same little black dress and spike-heeled knee boots. Sex incarnate.

She was standing above me, looking down. Her hair fell toward me like a river of blood going over the falls. I couldn’t see her eyes, but everything else was just like I remembered. 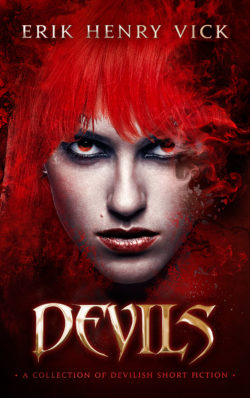 BUY NOW
amazon
free on ku
© 2020 Erik Henry Vick
Website Design
By continuing to use this site, you are agreeing to our use of cookies to provide the best experience possible. Learn more