The Hag is here! 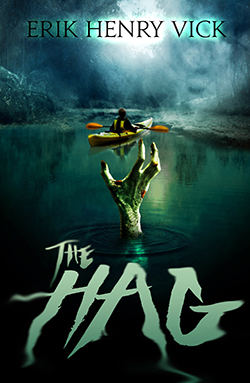 When I released Demon King at the end of March last year, I had no idea how it would be received. I loved the story, and I loved the characters, but it was my second indie title, and it was straight horror. More than that, it bounced all the way back to 1979, and even "the present" portion of the novel was eleven years in the past! Reader reactions were overwhelming, and the clamor for the next book began almost immediately--which was a bit of a problem since I was in the middle of The Blood of the Isir series!

Lucky for me, you readers are a forgiving sort! I'd planned to have this out around April or May, but then the hipster struck, and...well, here we are!

Here's the blurb, if you haven't already seen it:

War is hell and a war with hell even more so…

Broken by terror, separated by time and circumstance, drawn back together again by insufferable evil, friends stood against the maleficent horror and survived once. But the demons have a new leader, and Toby, Benny, Shannon, Mike, and Scott now face the collected might of the demons inhabiting Oneka Falls.

They hunted the Demon King in the forest around the town and sparked a war with an enemy they barely understood. Worse yet, by attacking Herlequin and disrupting his plans, they painted a bright target on their own backs for the rest of the demons in the town. Led by Chaz Welsh and Lee LaBouche, the demons strike back, forcing the demon hunters to run for their lives.

How can Toby, Benny, Shannon, Mike, and Scott hope to win a war against the demons entrenched in Oneka Falls? How can they even hope to survive?

In case you are still confused about the difference between The Bloodletter Saga and The Bloodletter Collections, The Hag is a collection of two novels from the saga series: Wrecker and Black Swan.

« Gold for Rooms of Ruin! Ch-Ch-Ch-Changes »
Novels The Hag Writing
© 2020 Erik Henry Vick
Website Design
By continuing to use this site, you are agreeing to our use of cookies to provide the best experience possible. Learn more